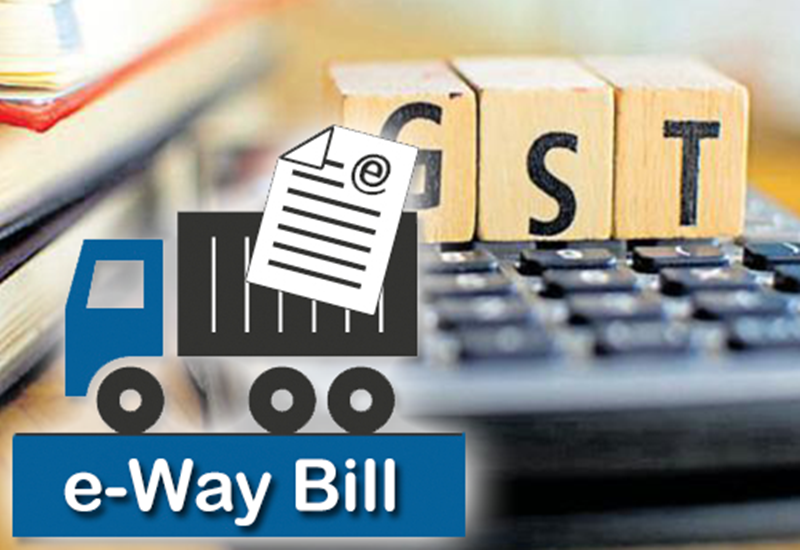 E-Way Bill is an electronic receipt which is needed to be generated for the transfer of goods from one place to another. This bill is only created for the consignments which are above the value of Rs. 50,000.

The consignment value of the goods is the value which will be determined according to the provisions provided under section-15, declared in the bill, an invoice of supply or a delivery challan, whatever the case maybe, given in respect of the said shipment and is also inclusive of the central tax, state or Union territory tax, integrated tax and if any cess is charged in the documents. It will leave out the value of the exempted supply of goods where the bill is issued in respect to the exempted and the taxable goods.

In the 26th council meeting, it was decided to introduce the E-way bill on 1st April 2018 for all the inter-state movement of goods. For intra state same is applicable effective June 2018 in a phased manner.

Generation of E-way Bill (For Inter state movements of goods)

It is important to fill up Part-B because without filling this part, the EWB number cannot be procured. The person who fills up Part A also has the responsibility for filling up Part B. But according to sub rule 3, if the person who fills part A does not have the details of the vehicle which would carry the goods, then in that case he can mention the GSTIN of the registered transporter or the ID of the transporter of the unregistered transporter. In such a case, the transporter has to provide the details of vehicle in part B for getting the EWB number.

If a registered person purchases goods from an unregistered person then it will be treated as the registered person is causing the movement of goods. This has been mentioned in Note-1 sub rule 3. Therefore the entire responsibility in respect to the E-way bill will fall on the shoulders of the person who is registered, i.e., the purchaser.

In our view, if the sale is being made by the registered seller to the unregistered purchaser then it is always practical to obey with the rules of E-way bill irrespective of the fact that the movement of goods is being caused because of whom. This is done to evade legal action and chaos free movement of goods.

Rule 138(1)(2)(3) cast first liability of E Way Bill on registered person who causes movement (as explained above in table), it may be noted that in case both registered party (supplier and recipient) practically E Way bill can be generated by any one of them.1st proviso

First Proviso of Rule 138(3) gives an option to Registered Person Or the Transporter to generate the E Way Bill even if value of consignment is < Rs. 50,000

Where the goods are transported by railways or by air or vessel, the e-way bill shall be generated by the registered person, being the supplier or the recipient, who shall, either before or after the commencement of movement, furnish, on the common portal, the information in Part B of FORM GST EWB-01

This part consists of the following.

Legality of the E-way Bill

The period of validity is calculated from the time at when the e-way bill is generated. Each day is counted as twenty-four hours. In other words, the validity of e-way bill cannot be extended due to any reason.

Only in case of certain categories of goods, can the officer extend the validity of the e-way bill. Those categories of goods will be announced later by the government authorities.  In case the goods are not transported to the receiver due to any reason, the officer can procure another e-way bill after updating all the information in Part-B of FORM GST EWB-01.

Documents required by the transporter

According to rule 138(A)(1) of CGST 2017, the person who is responsible for a vehicle should have with him the following documents.

1.The tax bill of supply or delivery challan.

2. A duplicate copy of the e-way bill or the e-way bill number. This can either be physically or the vehicle should have a radio frequency device attached to it so that the entire information about the bill and the consignment can be generated.

A registered person can attain the Invoice Reference Number by uploading the tax bill given by him in Form GST INV-1. This can be shown for checking by the officer in place of the tax bill. This number is valid for one month from the date of uploading.

Role of Transporter in E-way Bill

The applicability of transporter has been explained in the points.

According to Rule 138(7) of CGST 2017, the transporter has the final responsibility to generate the E-way bill. In case of inter-state movement of goods which is not done through road, if the supplier and the purchaser have not generated E-way bill according to Rule 138(1), (2) and (3) of CGST 2017, then it is the duty of the transporter to fill Part A and part B as invoice of supply or challan for the delivery given to him for the transportation of the goods.

If numerous shipments are being carried on a single vehicle then the transporter should inform the serial number of the E-way bill procured with respect to every shipment. This should be done electronically on the common portal and a compiled E-way bill in Form GST EWB-02 can be initiated by the transporter. This bill will be generated by him on the common portal before the movement of the goods begins.

According to Rule 138(5) of CGST 2017, if the transporter has to change the vehicle during the transit because of any accident or mishap, then the transporter should update the details of the new vehicle before he commences the movement of good again. The details are to be informed in the E-way bill on the common portal in FORM GST EWB-01. But this data can also be given by the person who fills Part A while getting the E-way bill.

Transporter who hold GSTIN are not required to do anything regarding the E-way bill. They can release their liabilities of E-way bill by login through their GSTIN on E-way bill portal.

But section 35(2) of CGST Act, 2017 in accordance with rule 58 makes it compulsory for all the transporters who have not registered themselves under GST to register themselves by filling the form ENR-01. The result of registering through this form is the Transporter ID.

Get in Touch
[contact-form-7 id="59" title="Get in touch"]
DON’T MISS OUT!
Subscribe To Newsletter
Be the first to get latest updates and exclusive content straight to your email inbox.